How to use SeaBis to permanently eliminate ALL causes of stray current that causes electrolysis corrosion.

SeaBis System prevents 97% of corrosion.  The remaining 3% is caused by galvanic and is easily eliminated with Anodes after electrolysis CAUSE is corrected. 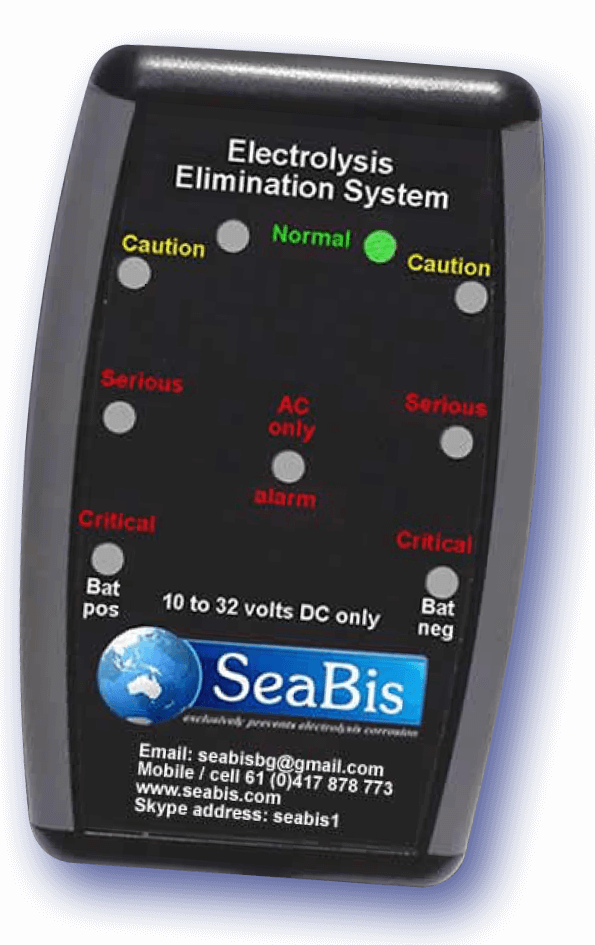 Learning to identify and correct corrosion cause.

SeaBis System identifies the CAUSE of corrosion then corrects it.

Corrosion cause learning provides the basics. We will guide you step by step.
CURRENT is the only cause. We eliminate it. No additional coating, plating, moving part or thru hull. 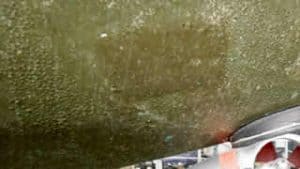 After SeaBis System, one year submerged: 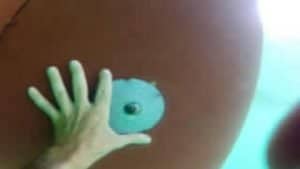 After 10 months using SeaBis Master there are no blisters below waterline. My zinc anodes have been consumed at their normal slow speed. Previously I noted that Corrosion at some points was fast. Now they became a very very very slow. Normal metal corrosion easy to deal, fix and eliminate. Marco Cianflone – captain/owner yacht [email protected]

Firstly Install SeaBis to battery positive, battery negative and metal hull or engine body. Second switch off circuits until SeaBis indicates Normal (green). The last circuit switched off was the cause. It now has no power so is easily identified. Thirdly use SeaBis System instructions to correct the cause. Support is included. Any difficulties then please contact me.

Understand the original corrosion cause.

The cause of corrosive current is one or more of the following:

2:  Carbon dust from brushes build up at motors or alternators

Now use the SeaBis Master System to correct the cause. So SeaBis will teach you how to correctly buy, install, maintain and operate equipment without creating corrosive current.

Corrosion cause learning fast track will provide back ground knowledge. I have cleared all corrosive current for more than 2,000 vessels. You are welcome to contact me without fee.  See below.

The SeaBis box proved very useful in tracking down multiple corrosive current problems aboard our boat. Old household wire was the leading cause.  It was originally installed by Beneteau and new electronics that had not been earthed correctly. Service from SeaBis was excellent with prompt replies to my queries. I did really appreciate your help. Thanks again for your help, its been A1 service.

Hi Glen, Thanks for your help earlier today. I’ve easily isolated the offending components… spreader lights depth sounder …and the starter motor. I guess the latter is due to carbon build up as it is meant to be a separate earth unit. Anyhow, back on track now. Cheers, Mike

My wife and I are currently circumnavigating aboard our 45 ft. steel yacht. I purchased a SeaBis System after borrowing a friend’s SeaBis and discovering that I, too, had corrosive current – a flashing red critical light is hard to ignore. This was after the boat had been tested and cleared by the test bulb method. I have no electrical skills but, by following the system, I was able to detect and eliminate the four causes of corrosive current – a non-isolated genset, a VHF aerial not insulated from the mast, a fuel tank gauge not insulated from the SS day tank, and the connection between a non 12v computer and the SSB radio – to achieve a very satisfying green normal light.

Furthermore, the SeaBis has identified AC leakage from worn brushes in 12v fans and, most recently, a path between the brushes and case on my Balmar alternator, which blew the SeaBis fuse before causing any damage. I consider the SeaBis to be a vital element in diagnosing my yacht’s electrical health. I would also add that Glen has been a great guy to deal with, standing behind his product and providing a wealth of diagnostic advice.

You may use my testimonial with verification.

Six years ago I purchased a Dutch barge in Amsterdam, shipped it to the UK and spent four years restoring it to a fully functioning residential boat in my spare time. During this process I learnt much about the ways of vessels which has added to my automobile knowledge. One of the things I learnt was that corrosion was destroying my hull which lead into an investigation, this in turn lead me to the SeaBis. I completed SeaBis Instructions and time has proven the cause is removed. No more corrosive current.

Well Glen your SeaBis system fixed the cause. No problems in 5 months. It was a deck generator and CB radio.

We purchased a steel cruiser 8 years ago and had problems not long after purchase with corrosion on the decks. When the boat was slipped we had evidence of metal corrosion which I think is caused by electrolysis, on the hull as well. When the boat was returned to the water I had a marine electrician check out the boat and he said that our boat was OK and the corrosion was caused by the boat next to us in the marina.

We then believed that was the cause, we tried to get the marina to do something about it but they did not want to know. When the boat was slipped 18 months later the corrosion was that bad we had to sand blast back to bare metal and repaint including the decks. We moved the boat out of marina and put it on a swing mooring, when the boat was slipped again it was evident again. I looked on the web and found the SeaBis site and purchased a unit since then the decks have stopped showing signs of accelerated corrosion. Although we have yet to slip the boat again to check the hull I am confident that the SeaBis unit is performing, as the decks are looking great.

Two Volvo engines with a carbon fibre mast and extensive advanced corrosion to engines. One has previously been replaced. The Owner and Peter traced the cause to a separate power supply in the instrumentation. Fitted an isolating diode and isolating switches to both engines. Problem fixed.

By continuing to browse the site you are agreeing to our use of cookies. Privacy details at About.